One of the easiest (and most delicious) holiday meals you can make on your barbecue pit is my double smoked honey glazed ham recipe. It’s called “double smoked” because you start off with a pre-cooked (and smoked) ham, then use your smoker to warm it up. The whole thing gets topped off with a thick coating of sweet honey glaze before serving! 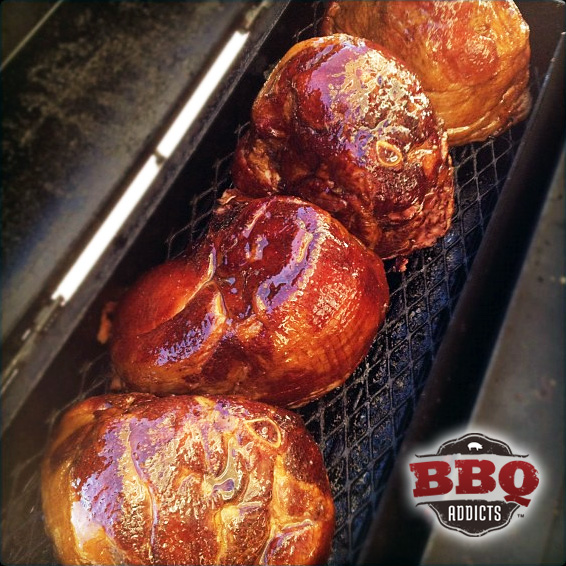 When picking out a ham you just want to make sure you are picking out a “Fully Cooked” or “Partially Cooked” bone-in cured ham. The thing to avoid here is a “fresh” or “green” ham. Those are completely raw, and would be your starting point if you wanted to cure the ham yourself. Cooking a fresh ham without curing it would result in something more akin to pulled pork than ham. Home curing is a completely different topic, so we’re just going to start with a store bought cured ham.

The amount of smoke you decide to put on during this second smoke session is 100% personal preference. I like to run a gentle smoke and keep the ham unwrapped throughout the entire process. If you want a little less smoke, then wrap the ham in aluminum foil after about an hour in the smoke. Cooking in an foil pan can make this step easier. That allows you to simply cover the pan with a sheet of foil instead of having to remove the whole thing from the pit to wrap.

The recipe calls for a 10-12 pound spiral cut ham. If you want to go bigger, then it will just take more time. Mine normally takes about 3 hours, but like all barbecue recipes…we’re looking for temperatures, not time. And lastly, spiral cut hams seem to cook a little faster than the whole uncut hams.

Place your ham in a 250 degree smoker with your favorite smoking wood. Apple is my go-to when working with pork, but that’s just personal preference.

While the ham is cooking, fully combine the brown sugar, honey, Dijon mustard, and pineapple juice.

Once the internal temperature of the ham reaches 140 degrees, baste with the ham glaze. If the ham won’t take all of the glaze, then apply a second coat after 10 minutes.

Continue cooking for another 30 minutes, or until the internal temperature of the ham goes above 145 degrees. Remove from pit and enjoy!