Yesterday we busted out our grilling skills to create a burger worthy of a Pittsburgh sized appetite.  But as we turn our attention to Arizona for the second half of our Super Bowl feature, we’ll be shifting our culinary skills in a different direction to bring you the Anquan BREAD BOWL-din SOUP.  Okay, if you’re a BBQ lover then a cup of soup may not be your cup of tea.  Well, what if I told you this soup was actually a thick and hearty chowder?!?!  Still not convinced huh…did I mention this chowder’s main ingredients are flame grilled corn cobs and smoke roasted chicken breasts?  Yeah, I thought that would get your attention! 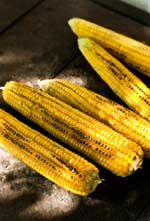 This time around we’ll be using a stovetop smoker instead of the standard patio smoker that you’ve seen in our other recipes.  Stovetop smokers are very simple to use, and are a great alternative for people who don’t have space to store a full pit.  They operate a little differently than a standard smoker by essentially using saw dust in place of wood blocks or logs.  To create smoke, you sprinkle a tablespoon of the wood chips into the bottom pan that sits on the burner of your stove.  The heat from the stove causes the chips to smolder and impart their delicious flavor into whatever treat you’ve decided to seal inside the chamber.  Since the chicken we’re preparing is going be used in a chowder, we’ll want to keep our smokey flavor on the mild side to keep it from overpowering the other ingredients.  To accomplish this, we’ll be using a 50-50 blend of alder and cherry wood, both of which have a much lighter flavor compared to the traditional BBQ woods like hickory and mesquite. 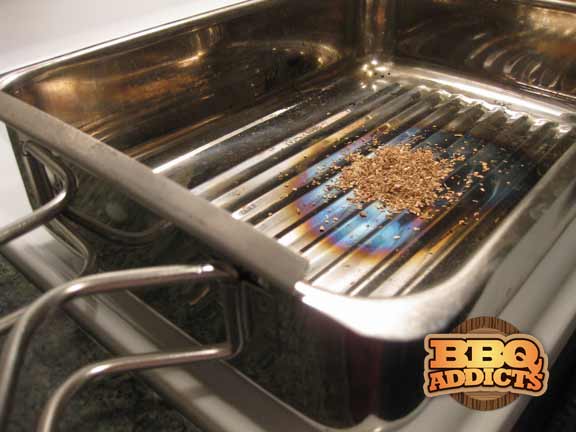 To help make clean-up easier, wrap the drip pan in aluminum foil before placing on top of your wood chips.  The grate should slide directly into the drip pan to raise the meat up off the hot surface.  Place four bone-in chicken breasts on the grate and seal the smoker up tight.  You’ll want to cook the chicken breast on medium heat until the internal temperature reaches 165 degrees.  Since just about every stove in the world seems to have different temperature settings, you’ll have to do some experimenting to figure out which level works best for you.  The dials on my stove have settings of 1 through 10.  5 seems to be the ideal setting for me, but I know my stove runs hot, so you may want to go a little higher than that. 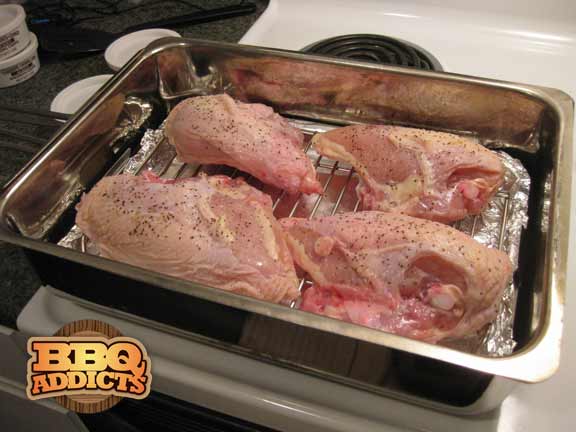 While your chicken is smoking away on the stove top, we’ll turn out attention back to the BBQ pit.  The recipe we’re working from calls for 4 ears of grilled corn, but I threw on a couple extras so I’d have a snack while the chowder is simmering.  The roasted corn is where this recipe gets a good amount of its flavor, so don’t get lazy and use the canned variety.  Just slather the ears with a good amount of butter and lightly season them with salt and pepper.  Place them on the grill over direct heat until the ears are golden brown.  Since all grills have their hot spots, you’ll want to rotate the cobs around until they all evenly browned on all sides. They cook fast, so keep a close eye on them.  As you can see in the pictures, I was doing this at night.  A pair of illuminated tongs

helped me see the surface of the grill. 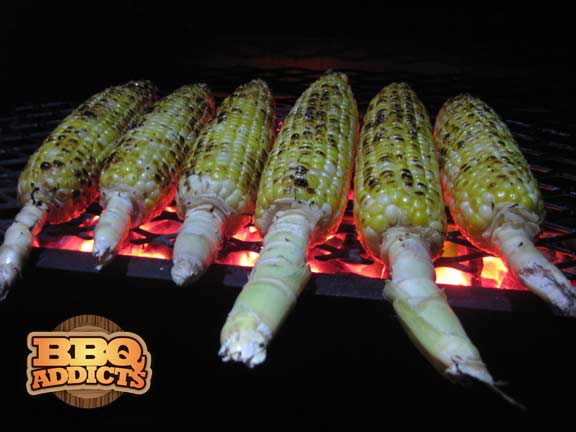 Once you’re done picking the kernels out your teeth from your snacker cobs, take the remaining four ears and slice off all of the kernels.  Place half of the corn into a food processor

and pulse several times to create a thick paste.  Do your best not to fully puree the mixture because we want to have some chunks left to add texture to the chowder.

Next you’ll want to chop up 1 large potato, 2 carrots, 2 stalks of celery, and 1/2 an onion.  Place the onions and carrots into a hot stock pot with 2 tablespoons of melted butter and sauté for about 10 minutes.  Add in the celery and potatoes and continue to sauté until the potatoes begin to soften. 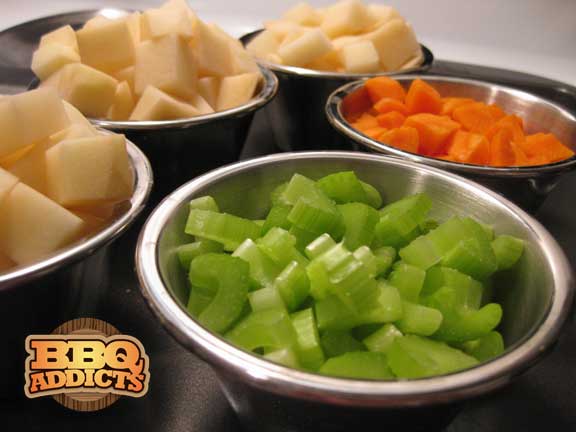 About this time your chicken should be just about done (and your kitchen should also have a fantastic smokey aroma).  Mine took about 30 minutes to fully cook, but that’s completely dependent upon how hot you’re running your stove.  Once the smoked chicken has cooled down a bit, remove all the bones and chop the meat into hearty sized pieces. 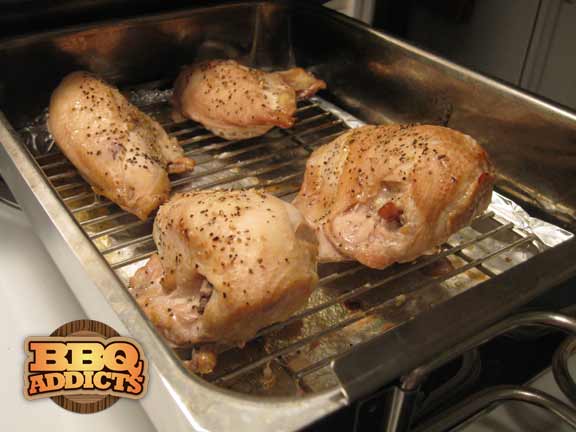 Once your veggies have started to soften up, add two cans of chicken stock, 1/2 teaspoon salt, 1/2 teaspoon pepper, 1/2 teaspoon sugar, 1/2 teaspoon oregano, the roasted corn (both kernels and paste) and the smoked chicken chunks to the stock pot.  Bring to a boil and let the mixture simmer for about 20 minutes, or until the veggies are fully cooked. 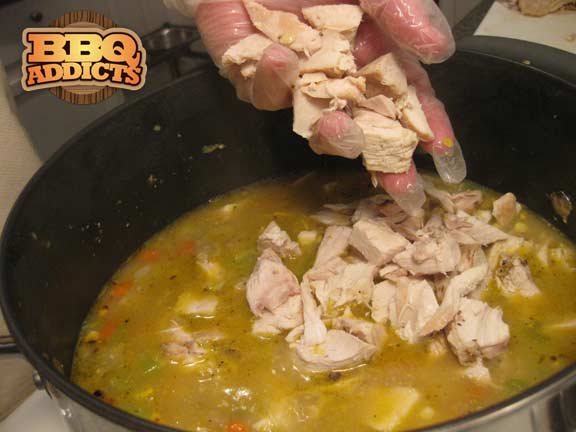 While we’re waiting on the veggies to tenderize, take a round of sourdough bread and cut off the top 1/3 of the loaf.  Hollow out the remaining stump to create an edible  bowl to hold your chowder.  If you want to crisp up the inside of the bread bowl, grab your basting brush and brush it with butter or olive oil and place under the broiler until it’s toasted to your liking. 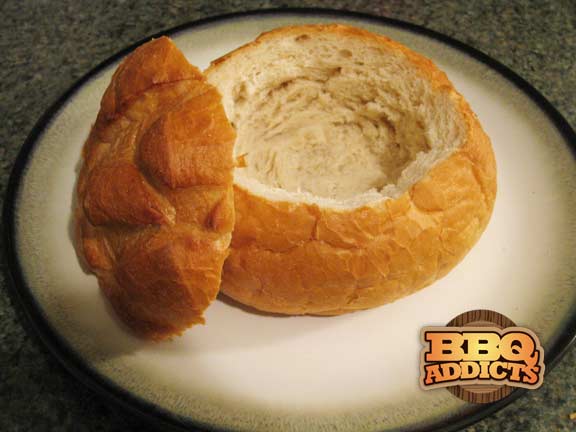 Once your veggies are fully cooked, add 1/2 cup heavy cream, and simmer an additional 5 minutes before serving.  Ladle the hot chowder into your bread bowl and serve immediately!

So whether you’re a fan of the Cardinals or the Steelers, you’re now armed with a cleverly named recipe to show off at your Super Bowl party this weekend. Now if only Johnny Budweiser, David Jagermeister, and Bobby Jello-Shot were on the rosters, then we could have taken care of your drink menu too!!!

Used in this recipe

Items featured in this post contain affiliate links. This means at no extra cost to you, we may receive a small commission if you click through and make a purchase. Programs like this help us provide you with high quality content for free.