“What is my favorite BBQ recipe?”  That is a question I have been asked more times than I can remember, and something I cannot answer for sure. Mainly because I have been on a quest to find the perfect BBQ recipe for 40 to 50 years and haven’t found it yet, and knowing me I never will! Saying all that, my favorite cuisine is Asian and my favorite protein is duck (domestic or wild). So, many years ago I decided to combine all of my passions (Asian/duck/BBQ) into this Szechuan Smoked Duck recipe! 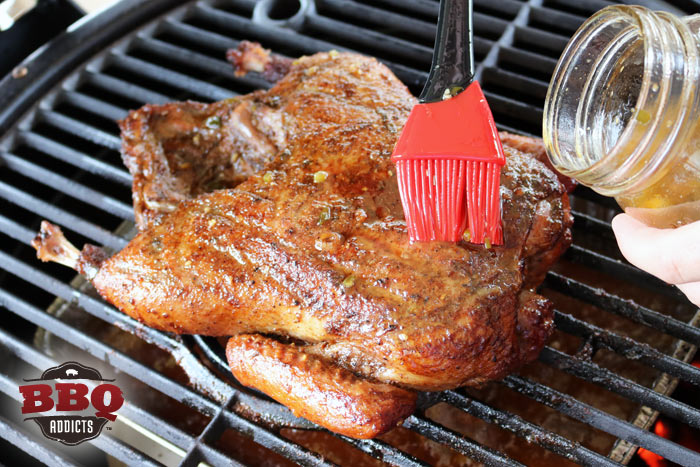 This Szechuan Smoked Duck recipe is from my book Paul Kirk’s Championship Barbecue, which was first published in 2004 and is currently in its 18th printing.  I also like to serve a Raspberry Habanero BBQ sauce alongside this duck recipe.  That bbq sauce recipe is not in my cookbook, but I have included it below.  Enjoy!

Rinse the duck inside and out under cold running water, removing the giblets and neck. Pat dry with paper towels.

Prepare an indirect fire. Place the duck on the pit breast side down, cover and cook at 230º to 250º degrees F for 2 hours.

Turn and baste the duck with the Picante Beer Marinade. Continue to cook, basting every 30 minutes, until an instant read thermometer inserted into the breast and thigh, away from the bone, registers 165º degrees F (about 4 hours total).

Let rest for 15 minutes before carving. Serves 4 to 6.

To make the rub combine all of the ingredients in a small bowl and blend well.

Heat a small heavy dry skillet over medium heat until it is hot.

Add the salt, peppercorn and 5 spice powder and dry-roast the mixture, stirring and shaking constantly, until the mixture turns very dark, but don’t let it burn!

Pour the mixture into a small bowl to keep it from darkening even more in the still-hot pan.

Remove and discard the peppercorns.  Store the seasoned salt in an airtight container in a cool dark place for up to a year.  Makes about 1/4 cup.

Combine all of the ingredients in a medium-sized nonreactive bowl and blend well.  Makes about 2 1/2 cups.

Combine all of the ingredients in a small sauce pan over medium heat.

Stir constantly until the jelly has melted and the sauce has combined, about 8 to 10 minutes.  Makes about 2+ cups.

Paul Kirk is Kansas City’s Baron of Barbecue.  He’s won over 575 cooking and barbecue awards (including 7 World Barbecue Championships), authored 12 barbecue cookbooks, was a founding member of the Kansas City Barbeque Society, and a 2015 inductee into the Barbecue Hall of Fame.